Your Majesty is Annoying! 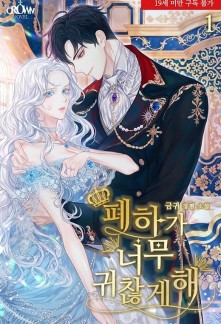 Your Majesty is Annoying!

Empress Medea did not die again this time, but this time it’s a little strange.

You’ve been tormenting me terribly this whole time, and now you’ve lost your memory?

Even if you postpone, the appointed night of union comes back every two weeks. It is useless.

I don’t even want to give it to you.

But if there’s anything Lyle overlooked, it’s that there really is another kernel in the shell.

Absurdly, she dies from drinking too much and enters the novel.

Medea was an extra dying in the very beginning.

So what happens to the heroine Seira?

Originally, she should get together with Lyle.

The couple’s night comes amid confusion.

For some reason, the mysterious fragrance of Medea stimulates Lyle’s heart.

As of that day, His Majesty’s annoying obsession begins.