My Pick Up Artist System 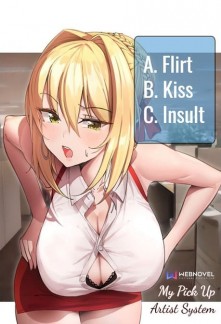 My Pick Up Artist System

"With this system, I'll become the world's greatest seducer! If it doesn't kill me first..." I was a nobody, a short fatty Otaku. Then, a girl's voice popped into my head: [Seduce a woman within a month or die.]

Facing annihilation, I saw no choice but to join the international community of pick up artists, and from that day forward, my boring student life became filled with craziness and womanizing. I just had one problem: "Why are all these guys insane?!?"

Pick Up Artist: One who uses specialized tactics to seduce women.

*No Netorare or Yuri.

*If you dislike harem, I guarantee this one will be different and become the best harem you've read on WN. There are colorful characters, no bad romance, and no annoying female conflicts driving the plot.

*Every volume so far has been even better than the prior one.

*If you're wary of reading originals, I assure you that I'm a native English speaker and you'll find the writing here to be at a print professional standard. If I said this story had the 2nd best grammar on Webnovel, no author or translator would dare say theirs had the 1st.