Maximum Comprehension: Taking Care of Swords In A Sword Pavilion 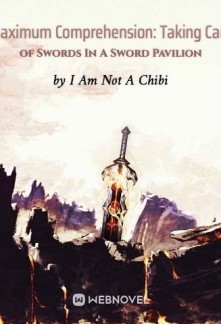 I Am Not A Chibi

Maximum Comprehension: Taking Care of Swords In A Sword Pavilion

Han Muye, who had exceptional comprehension skills, was reborn into a cultivation world. He joined a clan which specialized in swordsmanship. He then became the keeper who looked after the swords in the Swords Pavilion.

There were more than 100,000 swords stored in the pavilion. The keeper was tasked to clean all of them once a month.
When Han Muge cleaned the Qinghe sword, he acquired a hint of Sword Qi.
When he cleaned the Ziyan sword, he comprehended the swordsmanship, the Burning Plain, left behind by the original owner of the sword. He also acquired the Sword Qi of Burning Flame.
When he cleaned the Shanyue sword, he comprehended the teachings left behind by Master Boulder and learned the Mountain Sword Technique.
…
Han Muye built up his Sword Qi bit by bit during the past 60 years working as a keeper in the pavilion.
Throughout the 60 years, a disciple came to seek a sword in the pavilion, and he received guidance from Han Muye.
The Sacred Maiden from the demonic clan attempted to steal a sword from the pavilion, but in the end, she left dejected and empty-handed.
A swordsman came to challenge Han Muye, and he left with a broken sword.
…
60 years later, the Celestial World invaded the mortal world.
The disciple had become an exceptional Sword Deity. He wielded his sword and protected a part of the world.
The Sacred Maiden had become the demonic clan leader. She sent a letter to the Swords Pavilion and led her clan to fight against the gods.
The swordsman had achieved enlightenment in his swordsmanship. His Sword Qi rifled up to the sky.
…
The gods from the Celestial World loomed over the sky above.
Han Muye slowly stood up. 100,000 swords followed him as he emerged from the pavilion. His Sword Qi could be sensed from 30,000 miles away, and his Sword Will pierced through the realms.
He declared, “Today, I, Han Muye, will traverse the sky. I want to see who among the gods dares to invade this mortal world.”