How to Survive as the Wife of The Monster Duke 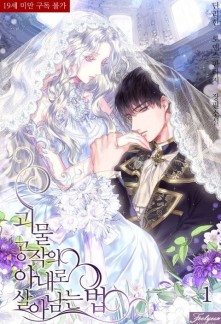 How to Survive as the Wife of The Monster Duke

Ilyin, who could dream predictive dreams, dreamt of spending her first night with the Duke of Biflten.

‘Am I going to marry the Duke of Biflten?’

The notorious duke was known to stiffen one’s body when one’s eye meets his. Besides, he’s a madman whose sword is faster than words.

“You can leave this mansion whenever you want.”

In the dark night, the Duke of Biflten whispered. Contrary to rumors, he was kind. But he never showed his face. So then Ilyin, after spending ten nights with him, asked.

“Does one really become stiff when looking into your eyes?”
“No.”
“Then can you show me your face?”
“Of course.”

It was easier than she had thought. But the faceless husband was silent for a moment. Then, he whispered in a sweet, low voice, like the devil.

“But you have to make a promise.”
“What is it?”
“If you look at me, you’ll never be able to leave this castle again, Ilyin.”

‘I don’t want to leave you either.’

Despite his voice having no emotions, there was a strong hint of obsession.