CEO's Runaway Mate and Her Cubs 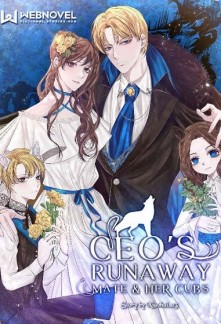 CEO's Runaway Mate and Her Cubs

It's hard to win when your competition is small, cute, and calls your (future) wife their mommy.

Lara spent six years doing odd jobs to sustain her five-year-old kids. She fled from her birth town after noticing some of her children's weird habits.
They growl when they fight, and their teeth can cut the skin like it's nothing. They prefer meat when it's cooked raw. They howl at the moon when they don't want to sleep.
However, they're her children.
She's been on the run ever since to protect them. She knows nothing about the stranger she met that day and whom she spent the night with. Even the details are blurry in her mind, except for that weird, compelling attraction that brought them together.
When she scores an interview at the most prestigious company in Norwich City, she thinks her life will turn for the better. Until she meets him again.

Nathaniel Woods, Alpha Nate, is the CEO of LY Corp. A fated night of six years ago, he found his true mate. Unfortunately, that woman fled after their passionate night, leaving no traces for him to follow.
A twist of fate makes them meet again, and he's settled on not letting her escape.
But this time, she's not alone. There are two pups with her, growling and fighting, firmly set on not letting him get to their mommy.

WARNINGS:
Possessive male lead and even more possessive little buns.
Slight misunderstandings, not too annoying (hopefully). The male lead is doting, but life is difficult with two jealous pups preventing him from wooing his (future) wife.
The story follows other characters along with the leads.
Smut content (signaled at the beginning with a warning).

Werewolves are a little different from usual, so please bear with my version of the trope ;)

If you can't stand too much cuteness, do not open this book.
If you're allergic to dog fur, stay further away. Characters here are wolves, but some of them grow ears and tail when they're excited (or claws when they feel threatened).