The True Mistress Has A Thousand Hidden Identities 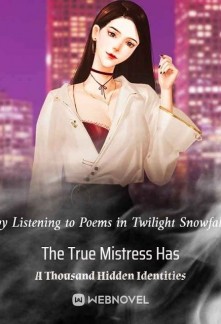 Listening to Poems in Twilight Snowfall

The True Mistress Has A Thousand Hidden Identities

Because she is wrongly placed at birth, Claire and another girl swap lives.

Eighteen years later, she acknowledges her roots and returns to her family. From a country bumpkin, she becomes the daughter of a rich family in the capital.

Her parents favor their fake daughter.

"Claire, Phoebe is smart and obedient. She's a thousand times better than you."

Her brother protects the fake sister.

It's said that she is uneducated and incompetent. Her grades are the worst, and she loves to fight. She is notorious for her misdeeds, and everyone looks down on her.

Only one man says domineeringly, "I will dote on you."

One day… her disguises are stripped off…

The Vice-Chairwoman of the Mathematical Olympiad, the guru of eSports, the hidden miracle doctor, the Chinese Art Master, the diva of the music industry, and the leader of the League of Death.

Those identities are all hers?!

Everyone starts to worship her: You are a real big shot!

Instantly, there are countless suitors.

A director extends an invitation for her to film a movie. The next day, the director is banned from the Internet.

The Masked King invites her to have dinner with him. The next day, the scandal of the Masked King becomes the hottest topic on the Internet.

A rich tycoon gives her a diamond ring as big as a pigeon egg. The next day, the corporation goes bankrupt and he becomes a beggar.

A certain envious lover online declares his sovereignty over her.