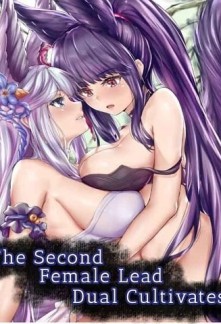 Heavy R-18 from chapter 10. It is Yuri and harem. Futa side characters.

Maria died and then reincarnated into a game. A harem game. Not as a protagonist, but as a member of the MC's harem. The childhood friend that never wins. Maria was quite satisfied with her life in this new world filled with magic and advanced science. She had looks, money, and a future to look forward to since she was a lesbian and had no intention of getting together with the MC.

And then the MC died, leaving the world and Maria in chaos. There was a tentative peace that lasted until she heard the court have a talk with a mysterious figure. They were talking about sacrificing Maria to the demon gods to ensure world peace. She was about to be killed for things she could not control and Maria did not want that. She especially did not want to die as a virgin.

Not one to be taken for granted like this, Maria decides to run away from home and started her new journey. This time, she was no longer a harem girl doomed to be cast away, but rather the hero of her own story. She would travel lands, gather friends and live her life out. And she has to do all this while running away from her dead ex-fiancé's sister who has an obsession with her for some reason.