Loved By a Vampire King 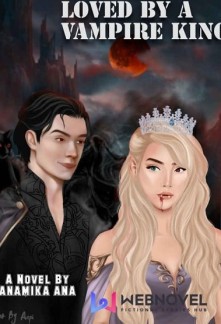 Loved By a Vampire King

After getting banned from her own world at an young age for a greater purpose, Esme Watts was living happily in the human world.

Disguising as a human girl, she was getting immense love from her human parents.

Slowly, she was forgetting her own identity and was living her life well with some beautiful and loving people around her.One day her joyful world turned upside down when she was suddenly kidnapped.

After getting kidnapped by the ruthless vampire king Aaron Richards, Esme Watts was forcefully locked up in a dark room waiting to be rescued by her dear ones.

Even every breath she took was too painful for her numb body..As days passed, she kept searching a way to escape from this terrific vampire world.

But after knowing Aaron personally and closely, will she try to escape or will she be trapped by his possessive love?

Will Aaron love her after knowing her true identity??

Why did Aaron want her desperately? All is in the name of love or something else!

Theme Line: When Curse Is The Beginning Of Her Love...!!

Being the first hybrid of two worlds was a blessing and curse for Ayra Chole, the controversial Princess from the world of Fairies. Possesing the immense power of two different creatures in the paranormal world, her journey towards living wasn't sweet like others anticipated more specifically after being a powerful princess who was treasured by her family like a gem. Dealing with everyone's hatred and jealousy since her birth, she constantly had to deal with her transparent emotions. She wasn't born to fear anyone except her own powers which goes uncontrollably wrong frequently.In this flicker of hope to find someone who could love and accept her trueself wholeheartedly, her mind was always restless in search of true love. One day,someone had finally picked up the courage to ask her hands boldly. But wait,who was he? The rumored Demon King, Cedric Arnaldo Dixon who was disdained by everyone same alike her coincidentally. The king of dragons whose hands were always filled with blood. Needless to say that he was rumoured to be hated by his own father ever since he born. A man who changed women more often like any ornaments. Rumours said that he had no heart to love others and killing was the only solution of his every arising problem.Very commonly, she was going to reject a rebellious man like him but the man had no other firm intention rather than claiming her as his own bride.How will their journey go around with so much hatred and evil powers? Can this two bloom the flower of love in their hearts? Or an untellable curse was going to destroy everything?

One night, he whispered beside her ears as she kept writhing underneath him,

" Darling, you can never fall out from a Demon's love. Once you have fallen in love with someone's evil side, you should know that he is your end game in this life time."