I Fell For My Nemesis 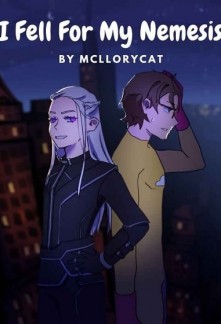 I Fell For My Nemesis

Cake artist by day, villain by night! Avery West is a woman on a mission to take down the conglomerate run by the man that killed her father. The problem? She might be in love with Mercury, the dashing hero trying to stop her. Juggling her feelings and her goal is no cakewalk but she is determined that her revenge will be sweet!

Avery never thought her massive crush on the hero trying to stop her would go anywhere. When the opportunity to date him in her secret identity falls into her lap she can't say no!

Read on to find out if their love can overcome the odds!

Mercury managed to free himself and began fighting her in earnest. Avery had to do her best to fend him off while not dropping the precious cargo she was carrying under one arm.

"What are you stealing this time?" he asked as he tried to grab it.

He was fast but she was faster thanks to the suit's capabilities. "Now why would I go and tell you something like that? I'm not one of those obnoxious supervillains who goes rambling about their plans left and right."

"Unfortunately. Those guys are easier to deal with. You're the most difficult villain I deal with, you know that?"

Avery grinned at him. That was quite a compliment. It meant he thought she was clever. It wasn't an inaccurate assessment either; most of the time when they went up against each other she managed to get away with whatever she was stealing. On the rare occasions she didn't she still made her escape. He hadn't successfully caught her and turned her over to the police once.

"I'm flattered! As fun as this has been, I really do need to get going now. See you next week since you always seem to know how to find me," she said before pushing a button on her suit that would shoot a cloud of black pepper into his face.

Mercury momentarily lost his bearings because he had to stop to sneeze and cursed about it getting in his eyes. She felt sorry for him but she didn't have time to stand around and chat today. The contents of the box needed to be delivered urgently.

"Be sure to rinse your eyes out with clean water!" Avery called over her shoulder as she broke through a window and jumped through it.