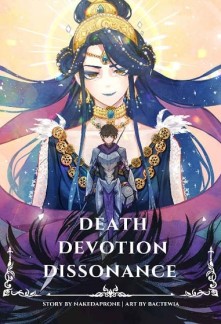 Death, Devotion, Dissonance describes the story of Evin, a boy who learns he’s a mage in his 10th birthday.

Finally, he could get rid of the Voice stuck in his head. After ten years of being thought as a lunatic by everyone around him, finally, he could be free of it. After all, mages are said to be able to do anything, right? A little Voice in his head shouldn’t be too hard to handle.

However, things do not go as Evin planned. Turns out, the Voice in his head allows him to cast magic in a way accessible to only nobility of the kingdom. This new revelation puts Evin in the spotlight, as many people become curious as to why a commoner knows such things… Everyone seems to suddenly want something from him.

Circumstances force Evin to trust the Voice in his head and listen to its advice, as he suddenly realizes that it’s the only ally he has inside the Academy.

How will the relationship between these two develop? Will Evin be able to separate from the Voice or will he have to keep relying on it? What is the Voice and what is its purpose in the first place?